Every single night before I go to bed I look out my window. Every single morning I get up, turn off the alarm and look out my window. What am I looking for? Nothing in particular. I just want to look at the sky and see what beauty awaits! Some nights it’s a sky full of stars or the moon. Oftentimes its fast moving clouds or fog, in which case I can’t see a thing! Same goes for the morning. There are times that the sunrise is so amazing that I just stand there in awe, frozen at the window. Then I start racing around the house like a lunatic looking for my camera and tripod so I can capture it. Sometimes I’m lucky enough to snap a few pictures. One of my favorite things to photograph is the sky: light or dark. It helps that John is an avid sky watcher as well. On nice calm nights you can find us in the backyard; he with his telescope or binoculars and me with the camera. It’s pretty cool because he will list off the stars and constellations that I have the camera pointed at.  Thankfully he’s willing to get up with me at 5 am and head to Signal Hill to watch the sunrise. 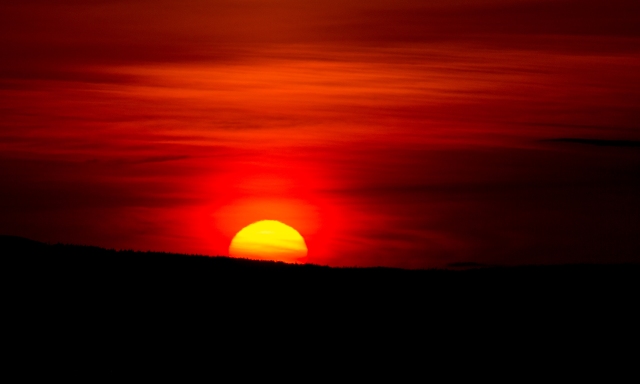 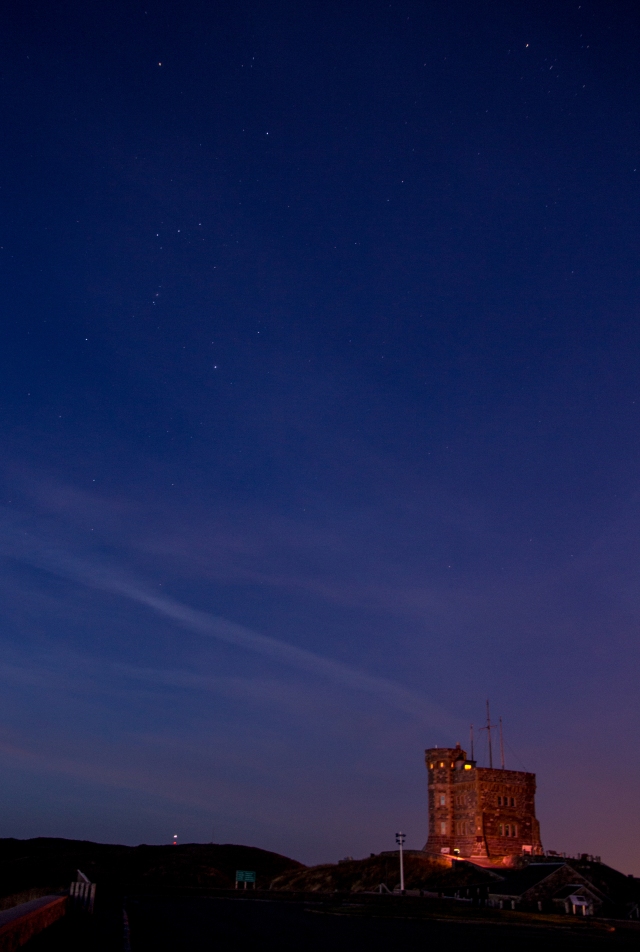 This was one of the benefits of working at 6am. Driving to work I’d often pull over to the side of the road and look at a scene like the one below. It never got old. 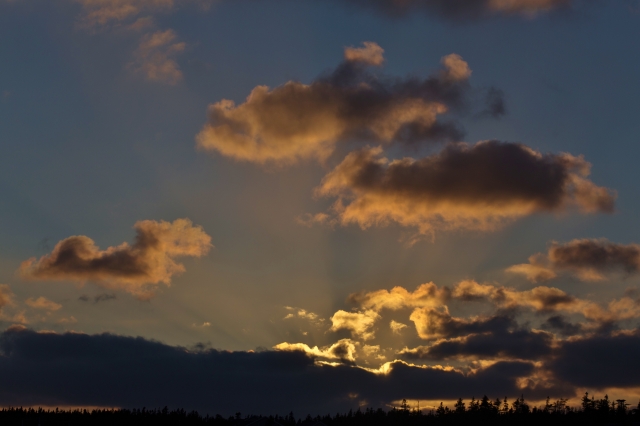 How many times did I have my head stuck out the bedroom window trying to get a picture of the moon or a wicked sunset? Hopefully the neighbors didn’t think I was trying to peek in their windows.

The fishing boat looks like a dot on the ocean. 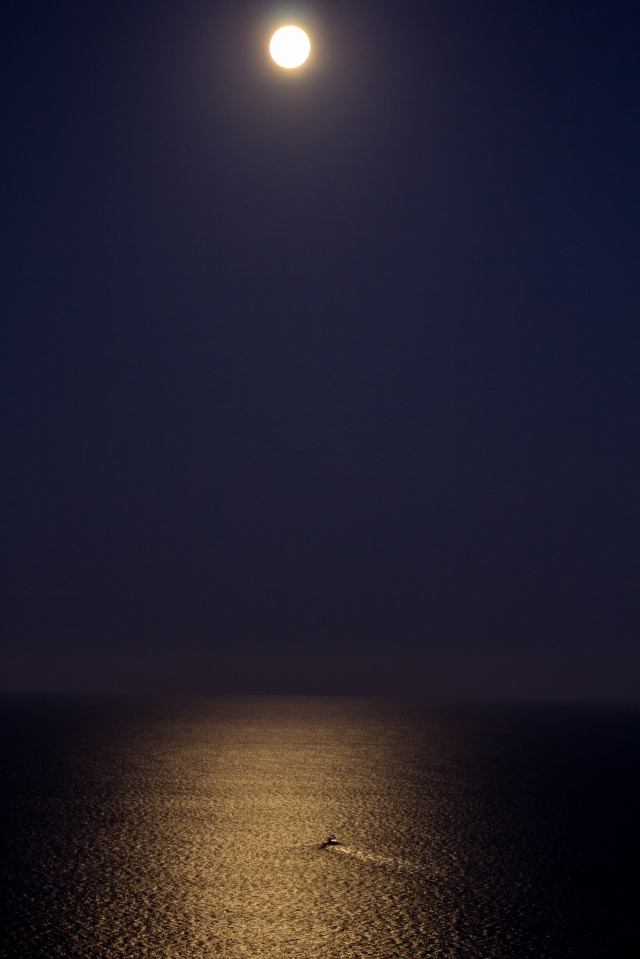 A boat heading out to fish as the sun comes up. This was taken on Signal Hill.

The next few pictures are ones taken in Florida a few years ago. We stayed in Tampa for a night and the sunset there was out of this world. We drove to Clearwater, a short distance away. Nothing like watching the sun sink into the gulf of Mexico. 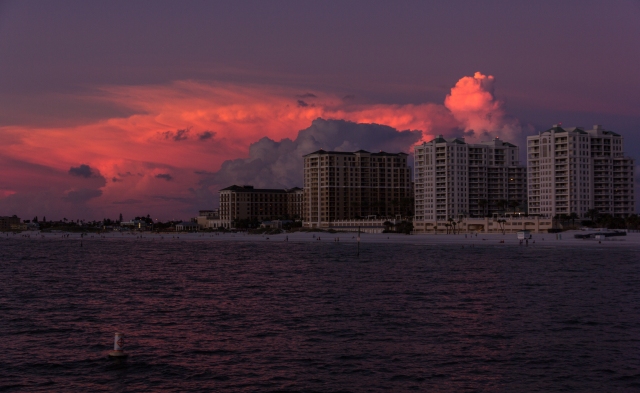 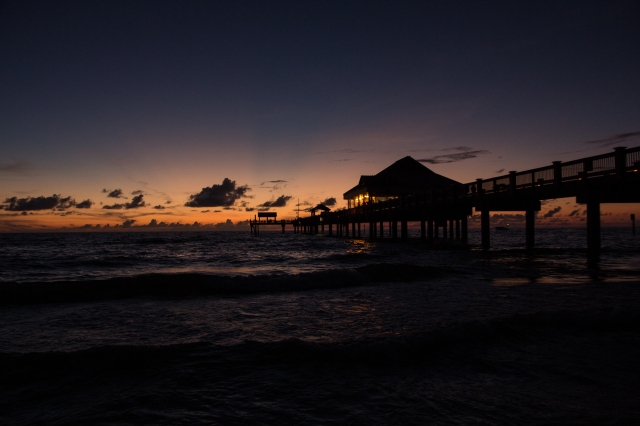 As we were leaving the beach driving back to our hotel that evening we could see lightning in the distance. It was non stop for the rest of the night and not a single drop of rain. It’s not hard to tell where the Tampa Bay Lightning hockey team got their name!

That’s a ball of lightning behind the cloud. We sat in the window of our hotel room and watched the show. It went on forever!

An early rise the next morning to catch our flight. This is what greeted us when we looked out the window!

Signal Hill has always been a go-to place of mine to take pictures. It rarely disappoints!

This is one of my favorites. It was taken from my back deck one morning about 6 or 7am. The sun was rising just as the moon was about to set. The sun was shining on the helicopter. Every time I see this one I wonder what the crew aboard thought about the sunrise or moonset. This sunset was from Fogo Island a few years ago. There were some forest fires at the time and the haze made for some pretty spectacular sunsets! 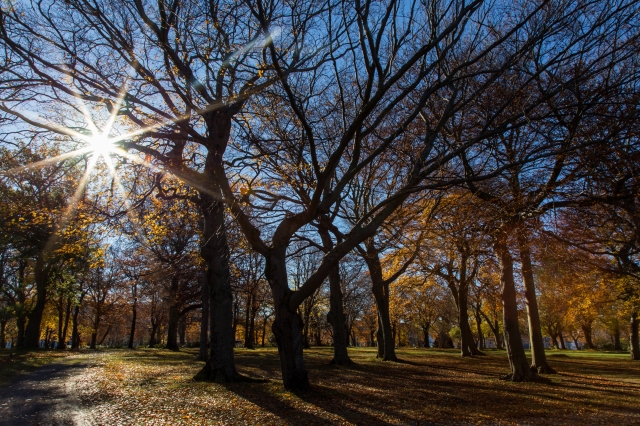 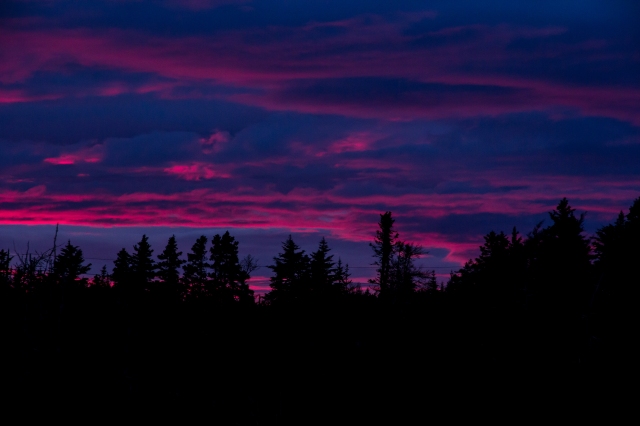 Star gazing in the backyard! 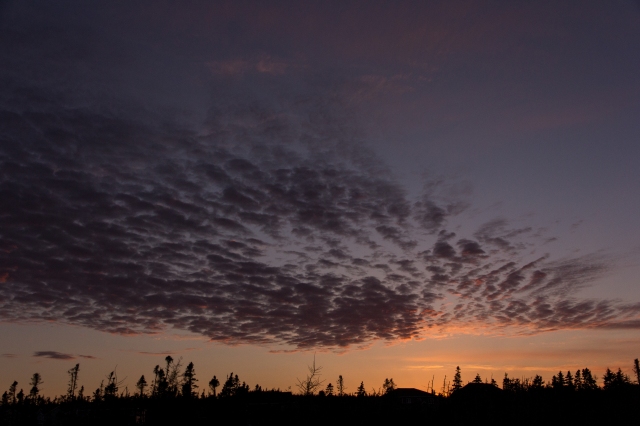 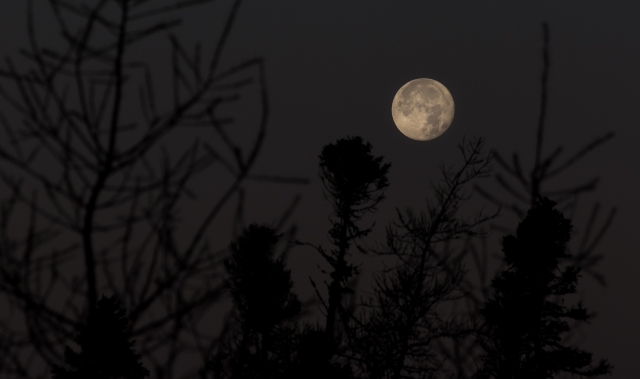 This is Lady Lake, Hr. Grace from a few summer’s ago. There were so many flies that night that I only got a few shots in. Thankfully this was one of them. Venus, Jupiter and the Moon. 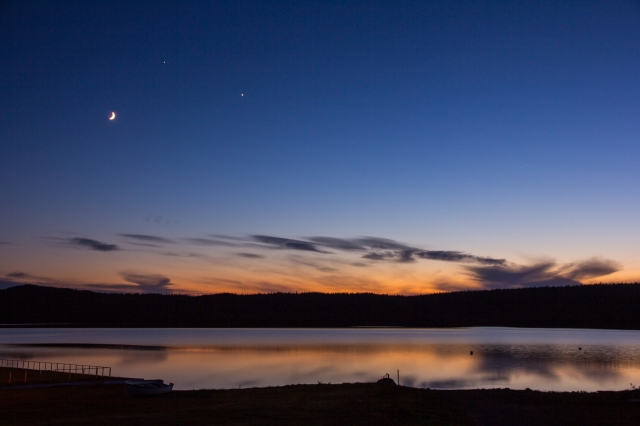 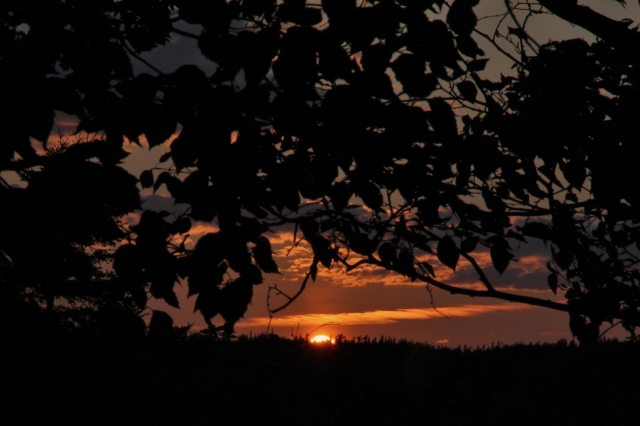 The Milky Way over Tilton 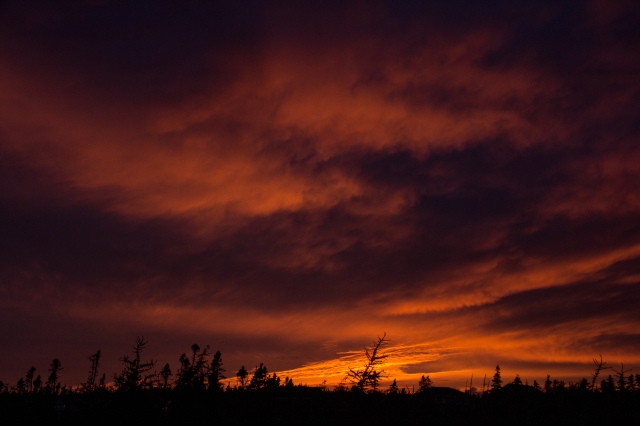 We went to Cape Spear one evening. I saw this couple watching the sunset. I took a snap. I have no idea who they are, I just thought they looked cool! 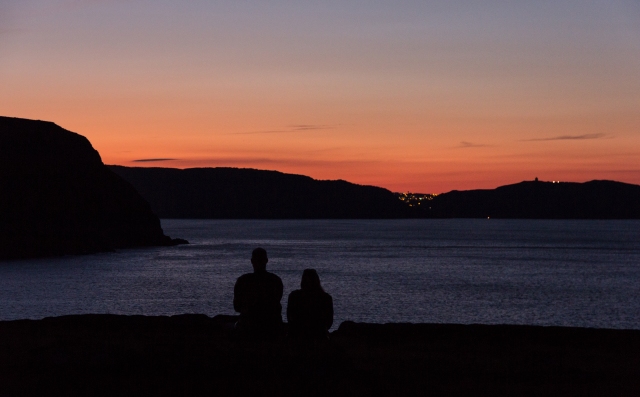 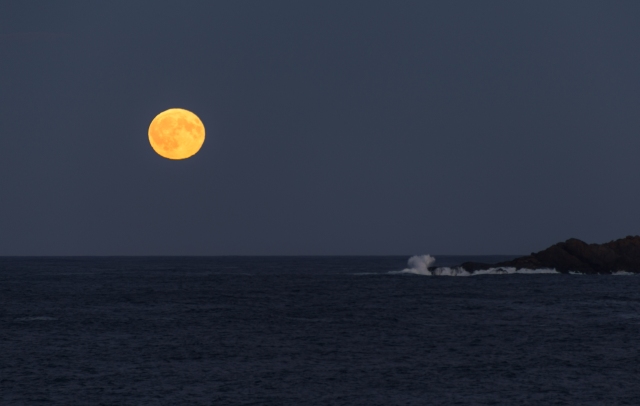 Down in Bauline, watching the sun set. 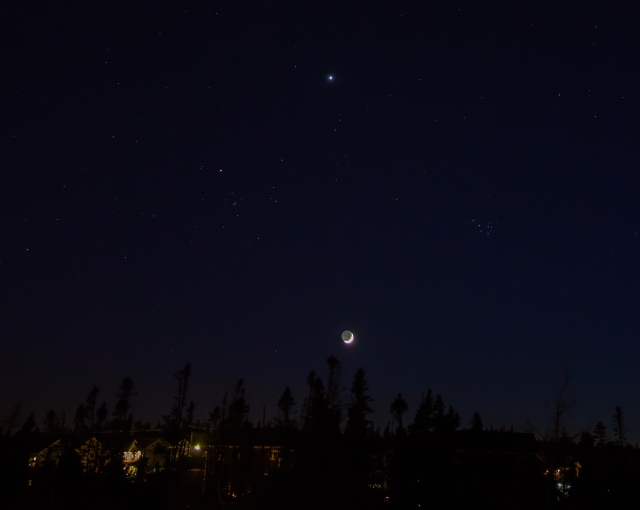 We camped in Terra Nova last summer. (Don’t get me started on the Otentiks, they were fantastic!) I couldn’t believe how calm the winds were there. The following two pictures are long exposure photos and there is hardly any blur in the trees. As they say “there wasn’t a draft of wind.” 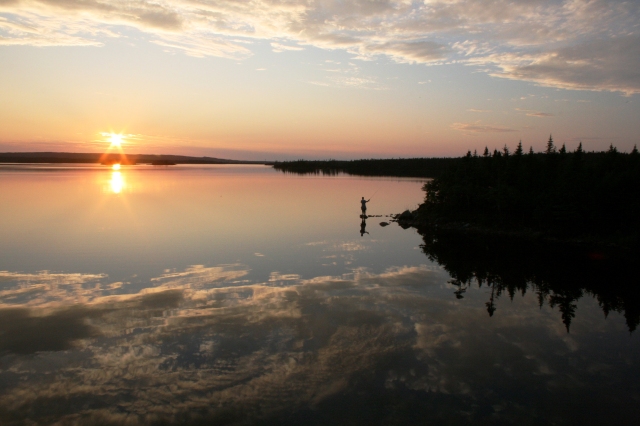 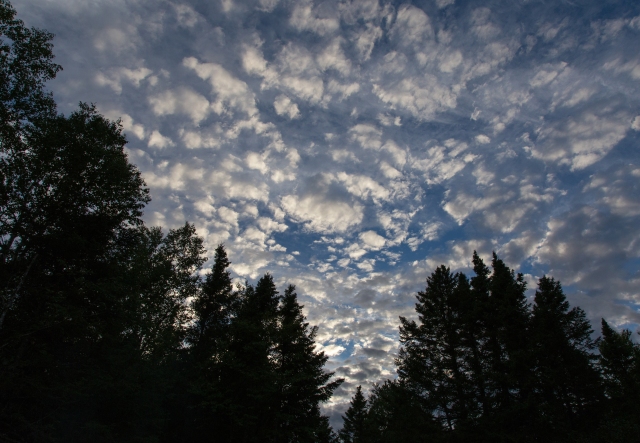 So, I’m pretty excited for the warm weather that’s coming our way, sooner rather than later (finger’s crossed). It’ll give me lots of opportunities to get out and take a few more snaps.

So, any chance you get, whether it’s 3 a.m. and you’re getting up to go to the bathroom or you’re on the early/late shift at work, take a minute or two, look out the window and tilt your head towards the sky. I promise you won’t regret it!

4 thoughts on “The Sky Above”

© Andrea Peddle and andreaintorbay.com 2021. Unauthorized use and/or duplication of this material without express and written permission from this site’s author and/or owner is strictly prohibited. Excerpts and links may be used, provided that full and clear credit is given to Andrea Peddle and andreaintorbay.com with appropriate and specific direction to the original content.